Get answers about using the current release of MediaMonkey for Windows.

I now have MediaMonkey Gold installed on two Win10 computers, my personal desktop and my personal laptop. My actual media library is on drive F on both machines. It's too large to fit on the C drive.

I want to keep the two installs in sync with each other. When I was using iTunes, this wasn't an issue, as I was able to direct iTunes to keep its database on the same drive as the library, then just synch the entire drive. Can the same thing be done with MediaMonkey? Or, where does MediaMonkey keep its database (playlists, metadata, etc) so I can sync those as well?

How does one do this?
Top

Trying to get my head around MM

Hi,
Using same MM.Db on all three PCs while tracks are in local folders on each PC as a copies is not possible in MMW as MMW detects that they are copies and handle them as such.

To explain. MMW uses HDD partition Serial Number to Detect Storage places. So in order to make it working on all three PCS you would need to Change Partition serial Numbers to be exactly the same on all of them and them MMW would work.
Best regards,
Pavle
MediaMonkey Team lead QA/Tech Support guru
Admin of Free MediaMonkey addon Site HappyMonkeying

Trying to use e computers with MM

I would like to use MM on 3 computers. I put my music in D:/ Music on all computers. If I load MM on 3 computers, is there any way to keep them in sync? Can I use synctoy to move the MM files to another computer and will this work? From reading some posts, it seems the portable install is only good if you want access to only one music location? Is this correct? I want a music library I can access while in the air with my laptop, no internet. Is there any sort of owner's manual explaining any of this? The Wiki seems very bare.
Top

Hi,
NO, When you move Files from one PC to another PC HDD Serial Numbers on HDD Partition Differs so MMW will assume that all tracks are new.

See my Attached Picture and if each partition is different PCs those serial Numbers needs to be same in order to MMW recognize them as same. There are apps that can change that, but you need to be careful. More you can read here https://www.partitionwizard.com/help/ch ... umber.html and here https://michlstechblog.info/blog/window ... or-volume/ 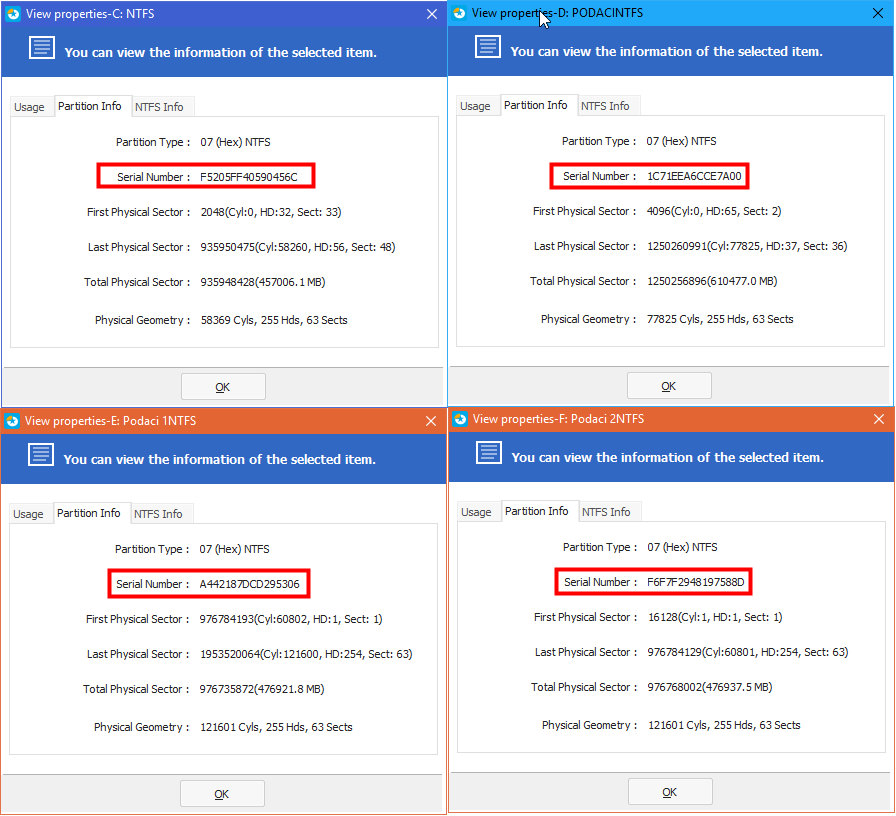 Thanks you for your reply. So having 3 separate music libraries won't work. What does a portable installation do?
Top

Hi,
Yes, you will have exactly 3 completely different Libraries that can't be in sync

due the fact they are individual and specific for each PC

Portable installation if installed on external drive and you scan all content of that drive in MMW library. Then when you insert that Drive in any PC and start MMW Portable you will have access to all the files on drive and any changes will be in MMW portable eg. no need for sync.

FYI i just tried Serial number change on two of my PCs and bunch of Files on each one at same location and as I suspected MMW worked flawlessly due the fact that D:\ on both PCS had same Serial number.
Best regards,
Pavle
MediaMonkey Team lead QA/Tech Support guru
Admin of Free MediaMonkey addon Site HappyMonkeying

If I change the serial numbers on my hard drives, what do I have to sync to make this work? Where are the MM files that need to be the same?
Top

Don't I have to move the MM files, the database to each computer?
Top

Yes, so only sync the db file in user/app data/roaming/mediamonkey, not the entire folder.
Top
Post Reply
52 posts