Get answers about using the current release of MediaMonkey for Windows.

Hi! I'm using MM 4.1.20.1864 And have been playing with Net Radio (Internet Radio). I found a station I really like and checked Help to see if there was a way to save it as a Favorite so I wouldn't have to search for it every time (FYI, it is "Radio Paradise" - https://www.internet-radio.com/station/radioparadise/ listed in Media Monkey as "Radio Paradise - Naim exclusive"). Anyway, Help says: 3) Click a stream that appears within the Now Playing list or within a Playlist*.
*To save a favorite station, drag it from the Now Playing window into the desired Playlist (e.g. a Playlist called 'Favorite Radio Stations).

Now, it (Radio Paradise) currently has no built-in player, and I'm using Windows Media Player to play it (Vers 12.0.16299.248 - if that matters...) but there IS no station/URL in the "Now Playing" window, just songs from my music library that I have recently played. I DID create a "Fav Radio Stations" playlist to drag the station into, but as no station is appearing, I obviously cannot do so. I'm sure there is something that I am missing or doing wrong or something, but I'm not sure what. Maybe it only works if the station has its own player? Any help would be appreciated. Thanks!
Top

Most curious. When I attempt to open with Winamp, it executes I-Tunes. I don't HAVE winamp, and I guess MM skips the missing Winamp and goes after the next icon on the right, which for me is I-Tunes. (I'd get rid of I-tunes if I dared, but even when using MM exclusively, I'm afraid it might want something from I-tunes to access my I-Pod). So when I-tunes launches, I immediately close it. Anyway, I don't see how it (the stream) can finish or be "Played;" it's a stream - it doesn't stop. I could try and download winamp and see if that works, but it seems to me that Win Media Player, which does play the stream, ought to work if winamp works. Does it work for you using Win Media Player? Are you "dragging" from "Now Playing" in MM? I'll download Winamp if I have to... Thanks.
Top

Hi,
Looks like .PLS is associated with other apps than MMW and you need to change it in order to have link open in MMW.

What windows version you have so that I can give you exact details on how to do it?

What is "PLS"?
I am using Win 10/64 Pro, 1709
I am getting to Radio Paradise via Media Monkey. On the far left of the screen, there are various selections... Now Playing, Music, Classical Music, Podcast, etc.... further down is the entry "Net Radio" Expanding that gives me two entries: Internet Radio and Icecast Directory. Selecting "Internet Radio," a large white box appears with "Music from 38,307 Radio Stations, and a large list of genre's below. In the upper right of that box is a Search Field, which is where I put in the search for "Radio Paradise." This yields apparently every radio station with the word "Paradise" in it. The one I like & Select is entitled "Radio Paradise - Naim exclusive". Upon clicking on it I get a "Now Playing (song name), and a choice of icons beginning with "No Web Player" then Windows Media Player, then Winamp, then I-Tunes, then RealPlayer, and lastly an icon that doesn't appear to belong to anything. I've been selecting Windows Media Player, and the music begins to play. From this point, there doesn't appear to be any way to save the station off onto the "Fav Radio Stations" playlist that I created. Hope that helps! Thanks!
Top

Have you tried to copy/Paste link I sent to you and does it play in MMW?

When you click on .m3u you should get OPEN/SAVE/CANCEL and when you click on Open it should either open in MMW or Show you the list where you select MMW and tick Always open with this application before you click on OK Which should open radio in MMW and then you can Add it to prepared playlist by either Drag and drop to playlist or Right click -> Send to -> Playlists and select playlist you want to it into. 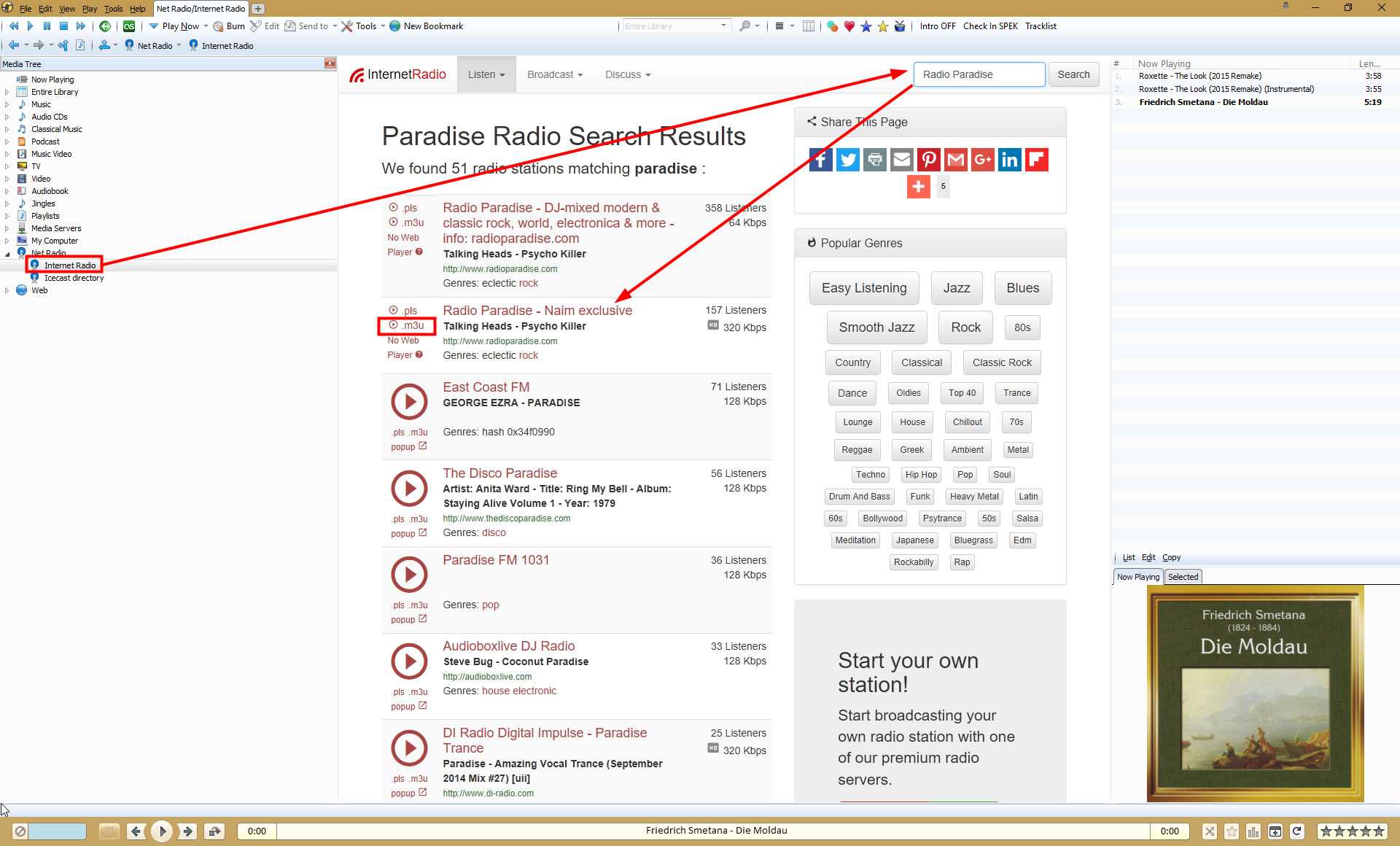 Ah, I needed to read your suggestions more closely. Yes, when I go to the top MM File/Open menu, there is an "Open file or URL" option. When I select that and paste in your URL (http://37.130.228.60:8014/) it does play in MM, and in fact, the current song playing even appears in the "Now Playing" column on the far right. However, I cannot click and drag that "now playing" song to the playlist (if that was your intention). Ok... so, now to "reset" things, I went to my music option and played a song from my library, thus ending the radio session. Then I went back to Internet Radio / searched radio paradise / and clicked on M3U (which I had never done before, having previously always clicked on the underscored radio station name). Interestingly, it immediately executed Windows Media Player (not giving me the option to select a different player) and started playing the Internet radio station (But in the "Now PLaying" far right column of MM, it still showed the last song that I had played from my library). Then I right-clicked and went "back" to the previous screen and instead of clicking on M3U, clicked as I had previously done on the underscored Radio Station Name itself, and as before it came up with the various icons of media players to select for execution. Ultimately, though, I am not seeing anything that can be dragged/dropped from the "Now Playing," far-right column in MM to the playlist section on the far left column. Perhaps you're dragging something from somewhere else? Oh, and how did you obtain the IP address (37.130.228.60:8014) for Radio Paradise? (And can I assume I could have just entered their non-IP address of http://www.radioparadise.com/ in the File/Open URL option?) Uhoh... I went back and forth between my music library and internet Radio too many times, I guess. Nothing will play now, neither songs nor radio. I'll close down MM and restart it and then I guess I will also check out http://defaultprogramseditor.com/ and see what it's about. Thanks - I'm learning a lot here!
Top

An addendum to the above reply. Closing and restarting MM fixed the "not able to play anything" glitch.
FYI, I looked up my default .Mxx applications using the Win 10 Settings screen. Here's the default media types I found by application:

Not sure what I was doing wrong... Media Monkey completely locked up 3 times (had to use Task Manager to kill the app), but I finally got it to work and have saved the station as a "song" in a playlist. I then renamed the song Title that was playing to "Radio Paradise." I THINK there are a couple of alternatives here, and please correct me if I am wrong. I am guessing that I can do the same thing with the next radio station I find (turning off Random play), OR I could just rename the entire playlist to "Radio Paradise" and just keep 1 "song" (Radio Station) in it... and add a new radio station into a new playlist every time. Well, I was going to say the problem was solved, but upon closing MediaMonkey and re-opening it... my station is still there in the playlist, but when I click on Play, the Play button changes to the Pause button for a second (as if it is playing), but then changes back immediately to the play button. IE: nothing plays. I've started all over and even re-captured another station in a new playlist - which plays, but when I close MM and go back, I have the same non-playing problem. I've tried changing the options from random or continuous play, etc, but nothing seems to help. Any ideas? Thanks!
Top

Multiple Radio Stations won't work as it is a continuous stream. So you can store them in the same Playlist, but once one is playing it should play forever.

How long did you wait after starting playback and have you tried using Play again.
Lowlander (MediaMonkey user since 2003)
Top

I've waited as long as 17 minutes. I've noticed something else. When I initially double-click the "track" or alternatively hit Play, the play button immediately changes to the Pause key for 3 seconds, then changes back to the Play key. Any secondary attempt clicking on the Play button changes to Pause and then back to Play in less than a second. (In neither case is any sound produced). I've also noticed that during the initial 3 second "playing," at the bottom line on the screen, the full "song title" of "Radio Paradise - Naim exclusive" appears, after which it changes to solely "Naim exclusive." (Not sure if that has any bearing on anything.)
Moreover, on the 2nd radio station I put into another playlist (Celtic Moon), the headers & columns are different. It appears that Celtic Moon is treated as an Album/Song (ie: there are columns for Artwork and Album) whereas these are lacking in the Radio Paradise radio station. However, when attempting to play the Celtic Moon radio station (and each time, this is after a closing of MMW and restarting of the app) there is no 3 second delay, but an immediate change back to the Play button. Other music and playlists work ok. Now, SOMETIMES after "playing" the Radio Paradise station, nothing else (neither regular music tracks or other regular playlists) will play - nothing will play and I have to close MMW down and start it up again. Incidentally, when I close MMW, after the screen goes away, after about another 5 seconds, I get a sort of "notification" rectangle in my lower right corner of my monitor with a browninsh-gold "disk" image (like blank artwork), plus the Radio Station name and a song name that I suppose was "playing" although I could not hear it at any point). Also, sometimes, after changing/executing too many things, the app just locks up and I have to kill it using Task Manager, but I can't seem to recreate that on purpose. There's so many weird things with this process that I may just have to give up on trying to save favorite radio stations. I DO appreciate your help. Let me know if you want me to try something else. Thank you!
Top

Capture this in a debug log (step 4b) and attach the log to a Support Ticket: http://www.mediamonkey.com/forum/viewtopic.php?f=1&t=69
Lowlander (MediaMonkey user since 2003)
Top

When I click on the link (or copy & paste it) I get "The requested topic does not exist."
Top

Never mind, I found it in the "How to report a bug" Forum.
Top
Post Reply
21 posts