Hello all.
I've been running MediaMonkey for about a decade now and had few issues.
About 2 years ago, I got my 7G 160GB iPod wet and killed the HD in it. Rather than spending $100 on another HD, I decided to try iFLASH's HD replacement kits; specifically the iFlash-Quad, a 4 MicroSD hard drive replacement board. I initially put the board in with a single 200GB MicroSD card and it worked flawlessly. It made my iPod better in every way. It synced faster, ran longer, weighed literally half as much and was just better. Here's where the problem starts. Last week, I was near to filling that 186GB (2.4GB free) of formatted space and decided that it was time to buy and add a second 200GB card to my iPod. After that addition was done, I repeated the steps of "restoring" the iPod with iTunes and then tried to re-sync it with MediaMonkey. It got to around 120GB, then froze up. I closed it and tried again and the display at the bottom of the Summary page for my iPod then said something like 25GB of other files and 95GB of music. I clicked auto-sync again and it added about a thousand more songs then froze again. The entire (LOOONNNNNNNG) process was attempted from a fresh restore 3 more times with similar results. Every time that I tried to sync, it would get to a random amount of music successfully synced and then freeze up. Afterwards, a portion of the music would be shown as "Other" rather than music. I even tried separately reformatting both cards as FAT32 drives, as recommended on the iFLASH page: https://www.iflash.xyz/prepare-sdxc-exf ... -the-ipod/
It's important to note that through-out this entire process, after the initial restore with iTunes, Windows Explorer, Paragon Disk Manager, iTunes, MediaMonkey, and a few other programs all showed that I had 366GB of usable space. This means that formatting wasn't and isn't the issue.

I've narrowed the issue down to the fact that MediaMonkey can not and will not synchronize with a JBOD drive system. It seems to be syncing up to ONE of the cards successfully and then losing track of all of the stuff that it puts on the second card. Does anyone have any idea at all how I can get this to work? I could just switch to a single 400GB card, but that kind of defeats the purpose have having the quad adapter; plus I already HAVE these two cards...
Top

I have made a further discovery regarding this issue. It's NOT a problem with the cards or the iPod. It's an issue with MediaMonkey on Windows 10. The first time that I tried to load the music onto the newly recovered iPod with both cards in it was also the first time that I had tried to sync more than a few dozen songs onto anything at one time from my newly built PC. My old PC was Windows 7 and that was what I had previously filled my iPod (and a few others) from. I built a new PC with Windows 10 and migrated everything over.
I just switched back to my original single 200GB card and tried to re-sync my iPod. It got to around 100GB, and froze up.... again. Also, once closed and restarted, it showed about 2/3 of the stuff that it had synced up before freezing as "Other" files and the rest as music.

Hi,
Can you please open support ticket and please create full debug log from start of MMW to connection of iPod to Sync Crash as that is the only way that we can debug this hybrid system

Last time I have tried to do such thing is when I replaced HDD with mSATA SSD on iPod Classic using this adapter https://www.amazon.com/mSATA-Adapter-Ca ... B009BA5JU6 Note I have not see a happier person when restore worked and end result was 220GB of free space (was several years ago).
Best regards,
Peke
MediaMonkey Team lead QA/Tech Support guru
Admin of Free MediaMonkey addon Site HappyMonkeying

I downloaded and installed the MM5 Beta and tried that. That won't even recognize my iPod Classic as an iPod. It just shows it as USB memory. It errored out and gave me this code: 85410000

I used iTunes (ugh) to put 115GB of music on my iPod. When I opened MM, the little bar at the bottom shows all 366GB as free space. The text under the name of my iPod says "Capacity: 366 GB" and "Free Space: 250 GB", so the program seems to be at odds with itself about whether or not there is anything there. Stranger still, if I go to the music tab under the device, the music is ALL THERE. I can even play it. I'll upload a Screenshot in a sec.
Top 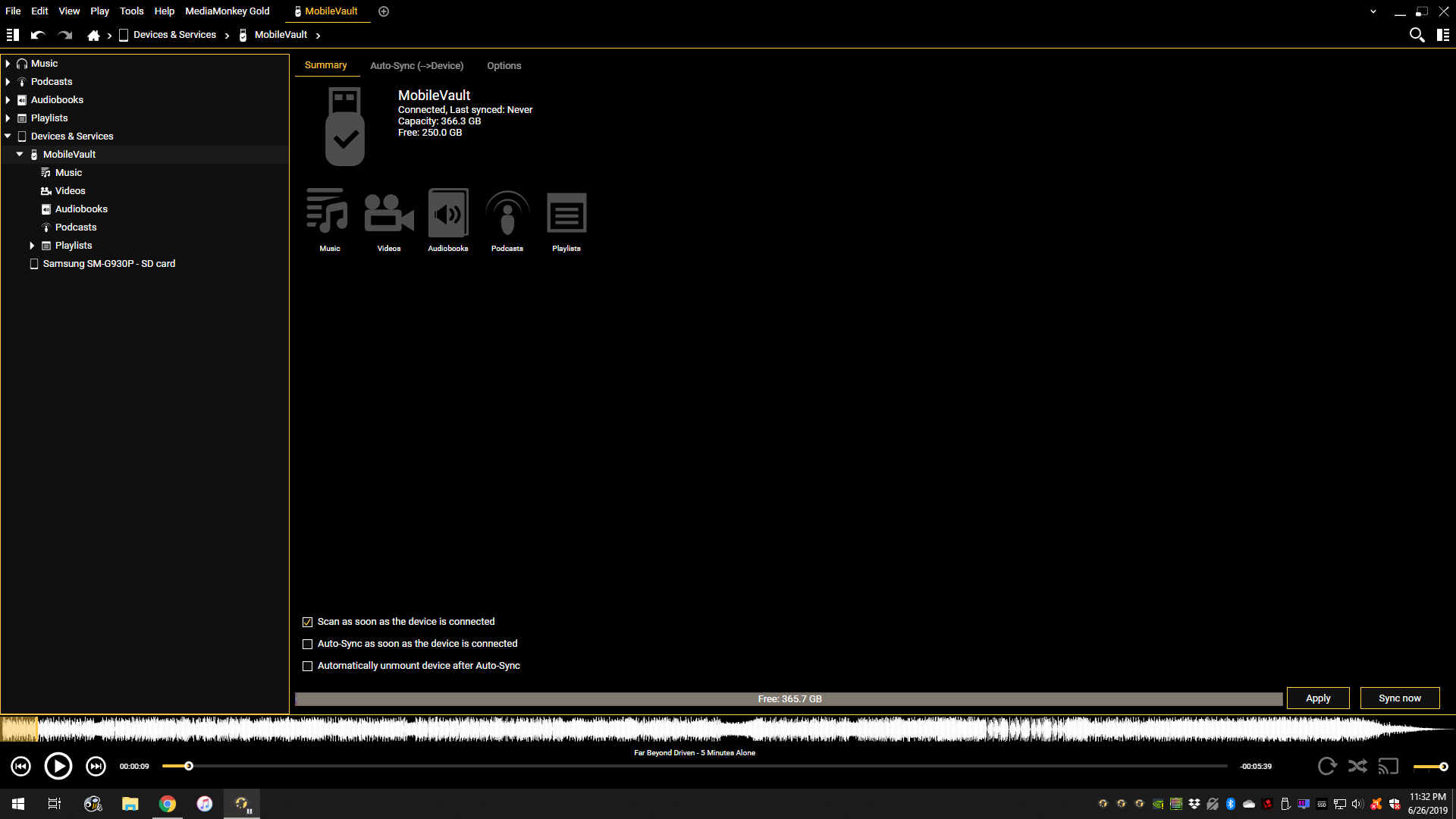 There's the music, on the iPod and a song that I played, from said iPod. 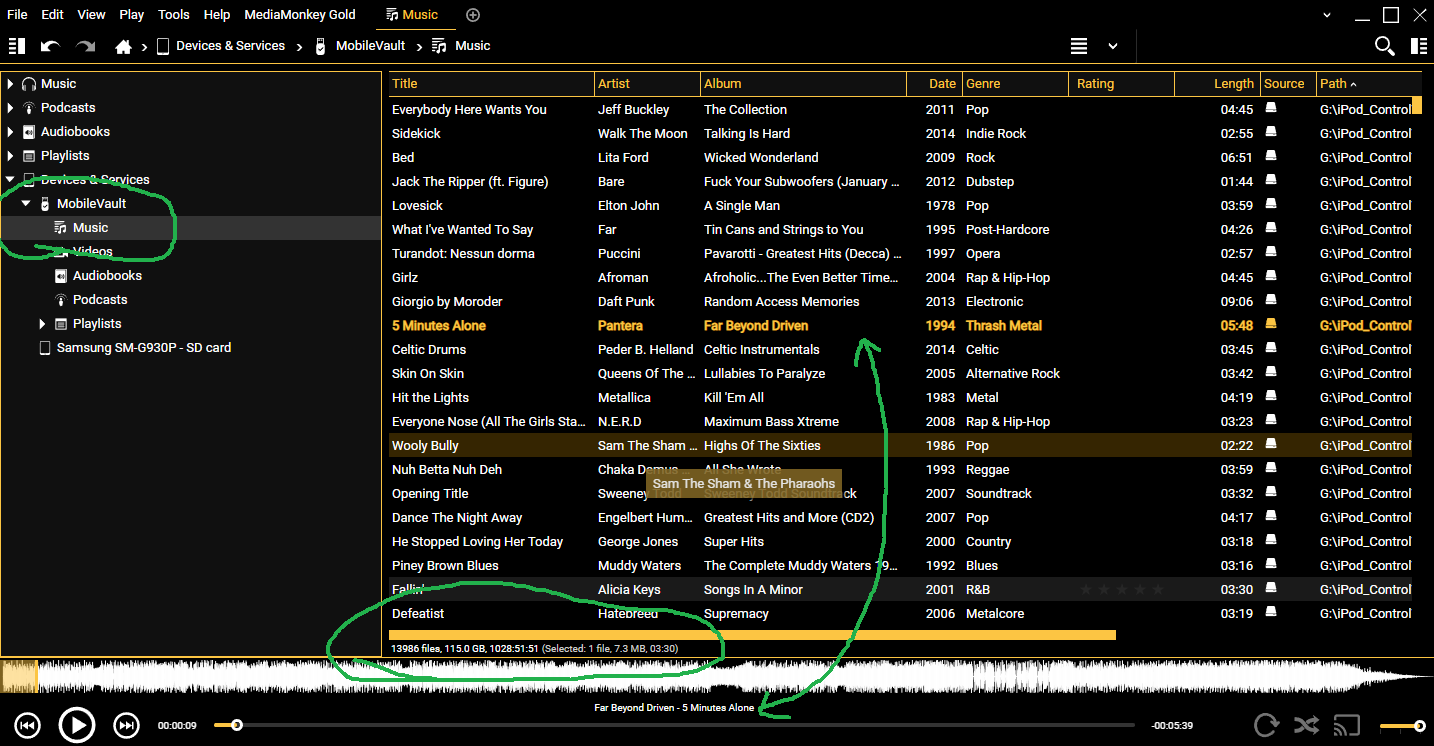 So if I got this correctly, a fresh iPod is not recognized but after iTunes Sync it is recognized, guess due the Apple Library in there, but Reports on track information and what type of tracks are synced is not correct?
If yes, can you please open support ticket and supply us a log file as described at https://www.mediamonkey.com/forum/viewt ... ?f=12&t=69 so that we can analyze what went wrong?
Best regards,
Peke
MediaMonkey Team lead QA/Tech Support guru
Admin of Free MediaMonkey addon Site HappyMonkeying

Hi,
Got Your Logs and info in a Ticket.

I informed Ludek and soon he should analyze the logs and let you know what to do next.
Best regards,
Peke
MediaMonkey Team lead QA/Tech Support guru
Admin of Free MediaMonkey addon Site HappyMonkeying

Awesome. Thanks!
This is driving me crazy. I've been using iTunes to put music and podcasts on my iPod, then manually adding the additional play count info in MM... It's easy with the podcasts; not so much with the music. LOL
Top
Post Reply
9 posts • Page 1 of 1