The mainly scope from Discogs Batch Tagger is to compare the (already) tagged album with the release at Discogs.com. The releases at Discogs gets often changed by the contributors, wrong information deleted or changed. With this script you can quickly check your tagged album with the Discogs release.
If an album is'nt tagged, the script get the titles with the same album-title and search them at discogs like Discogs Tagger.

It is strongly recommended to install this script with Discogs Tagger !!

Installing:
Latest installer can be obtained from the addons page through the download link. If you get errors or have problems during or after the installation, try installing the script after starting MediaMonkey with administrative rights (right click, run as administrator).

Uninstalling:
Script can be uninstalled from Extensions (Tools->Extensions->Uninstall) .

A - Tagging
1. Mark all album (the best bet is in the album node) you like to tag and click on "Discogs Batch Tagger" under Scripts.
2. The Start screen will show up. 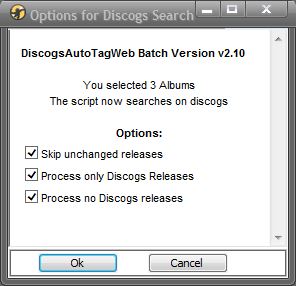 If the album is already tagged and match completely with the release at Discogs you can skip this album with the first first checkbox.
If you want the script to process only album already tagged, check the second checkbox.
For only untagged album choose the third checkbox. 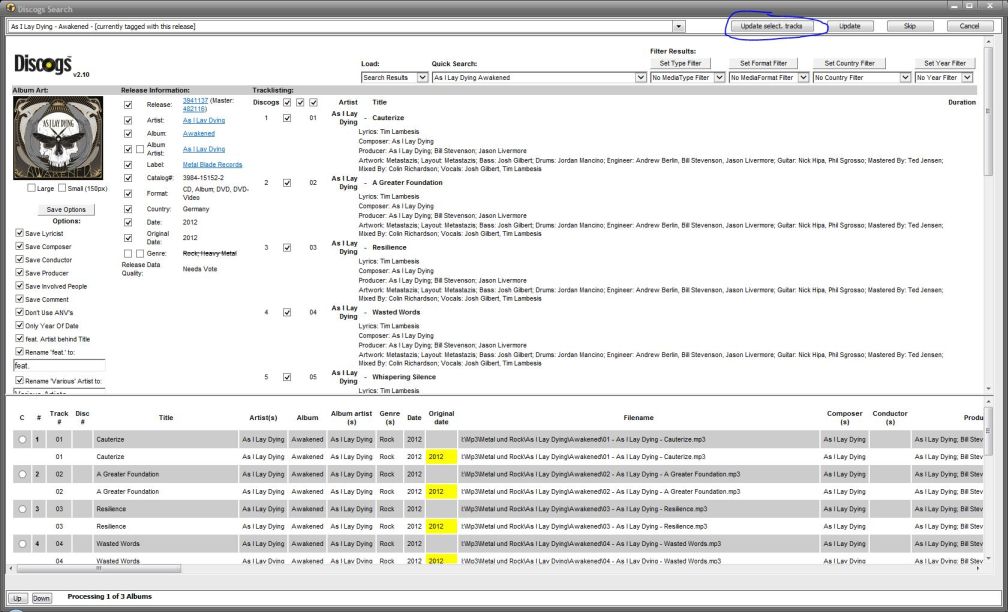 4. You can change options. You can remove checks for unwanted information (for example composer).
5. For more precise result you can set some filter by choosing the drop down. By pressing the "Set type filter", "Set format filter",... you can set more than one filter option
6. Once you save the options, they will be loaded as default on each time you make a new search.
7. If you de-select one or more tracks you have to click the "Update select. tracks" button.
8. New or different tags will be shown with a yellow background in the list at the lower end. If all music files are matching and correct then continue to next step, otherwise use methods described in section B.
9. Press "Update" button and tag tracks. Press "Skip" button to skip this album.


B - Finding the release
1. If there are no results, or completely wrong results, problem might be the search string. Use "Quick Search" to change the search string. Although there are plenty of alternatives offered, it is possible to type into the bar at the top and click on search button. Hint: Searching unique identifiers such as barcode number, catalog number etc. will help finding the release.
2. If the release is correct but some tracks were missing/matching wrong, then it's time to test for different versions of the release. One method is to try selecting a different result from the very top combo box to see if you can find the exact release. Other method is to use filters,it's possible to filter results by media type, country and/or year, whichever you know. After applying filters, you will get less and more accurate results.
3. You can use load combo box to switch load mode to master release, artists releases or labels releases. This would help you to locate the correct release faster.
4. If you still couldn't find the release, then it's time to go to discogs web site to locate the release. Once found just paste the release id or release url into search bar at the top and press search to directly load the release. The quickest way to find a release id is clicking on release id on the results page which will open release page at discogs.com. Clicking "All Versions of this Release" link will load master release and bring all versions of that release. Search bar also accepts artist, label and master release urls, which might be useful.
5. If your release is not is listed in discogs.com, it's best to add that release to discogs database (so that you will also help others) and use that release id to tag your tracks.

This release is BETA ! I tested the script to the best of one's knowledge and belief, but there can still bugs, so take care and test the script before tagging all of your album.


2.52 (30.12.2018)
- Added Grouping function: If tracks are grouped together with heading tracks, the name of it will be add to the grouping tag
- Fixed wrong separator in producer, etc tags


2.49 (03.04.2018)
- Filter now works correct
- If Filter was set, the background color of the drop-down field change to red (as a hint)
- Bug removed: Original Date will not used if another release was selected
- Some cosmetic changes to the script window


2.43 (10.2016)
- Leading/Trailing spaces will now detected and deleted in track-names and the release number
- will be send to mysql db, a busy bee will then fix it at Discogs


2.41 (06.2016)
- Discogs: Removed bug with featuring artist in the albumartist
- Musicbrainz: Removed one of the two blank character in featuring artist
- Trackname removed from first search


V2.21 (27.07.2014)
- Added OAuth authentication
- Now it's possible to use * as wildcard in the Keywords
- Added option: Print every involved people in a single line
- The default settings for saving the Cover Images can now be changed in the options menu
- Bug removed: Moving Track down to last position produced an error
- Bug removed: Empty format-tag produced an error
- Bug removed: Parsing wrong Artist Roles if a comma is between box brackets
- Bug removed with utf-8 characters in searchstring (with big help from tillmanj !!)
- In the options menu you can now enter the access token manually
- Bug removed in Keywords routine
- Removed bug with & character in searchstring
- Small bugfixes

Could it be this?
http://www.mediamonkey.com/support/inde ... icleid=153
Advanced Duplicate Find & Fix Find More From Same - Custom Search. | Transfer PlayStat & Copy-Paste Tags/AlbumArt between any tracks.
Tagging Inconsistencies Do you think you have your tags in order? Think again...
Play History & Stats Node Like having your Last-FM account stored locally, but more advanced.
Case & Leading Zero Fixer Works on filenames too!
All My Scripts
Top

hi
Thanks for the reply
Im sorry for the inconvenience ..... Im new at this.

Just download the addon from this page and double-click the downloaded mmip file. The addon automatically install the script.

Did you installed the portable version ? Then please check the link Bex posted above.

Hi,
I having trouble using this script.
When i highlight an album I want to edit it takes me to the discog page but I cannot see or scroll to the bottom to see or edit what changes can be done?
Any ideas?
Top

Thanks for quick reply,
Using notepad at moment so unable to do a screen shot
Ive had a look at the screenshot here

I can only see the top part of the screen & the first line of where the information is highlighted in yellow
I can scroll down one line at a time but is too differcult to see what changes will be made.
I will try and do a screen shot as soon as I can.
Top

Buble wrote:I can only see the top part of the screen & the first line of where the information is highlighted in yellow
I can scroll down one line at a time but is too differcult to see what changes will be made.
I will try and do a screen shot as soon as I can.

Just checked on all resolutions (HD monitor) and still have the same result (slight difference on some but not able to see past first line at bottom)
Tried changing to orientation of the screen to portrait instead of landscape and I could see problem 4/5 lines at the bottom.
Top

Buble wrote:Just checked on all resolutions (HD monitor) and still have the same result (slight difference on some but not able to see past first line at bottom)
Tried changing to orientation of the screen to portrait instead of landscape and I could see problem 4/5 lines at the bottom.