Input from Matt, for Vista installation.
-----
On Vista, the extra security does not allow you to simply double click the vbs file to install. Here are the steps to install:

Otherwise you get a "Permission denied" error message.
--------
Thank you Matt.

This # of minutes part can be tweaked, by going to the AutoRateSongsOptionSheet.vbs and change the values in the very top of the script.

Based on a co-operation with fellow Monkeys, this turned out to be the model for rating.

Here's a nice link for Voices http://www.bytecool.com/voices.htm
This script requires SAPI5 to work with the Radio Announcer.

Skip monitor If skipped within set period, the song loose half a star ratings
Start after X seconds in player time. This allow you a period to sample song. No rating consideration will be done at all if the song is skipped within these seconds.
Stop at XX percent of the song in player time. This is due to an end of skip period is needed, and the basic idea is also that if you've put up with most of the song, it's not that bad.

Ignore < XX second songs is there to do nothing with tiny sound clips, interludes and stuff like that.

Ignore Mood/Occation songs is there to allow people who have special mood/occation files to be left untouched.

Time Stamp to Custom2 This write a Time Stamp formatted like "DayOfWeek TimeOfDay Season" only when a song receive a Rating Upgrade. Basic idea is to make it easy to find favorites in these time segments.
Northern Hemisphere is there to get the seasons right in above time stamp. If Southern, do not have this one ticked.

NOTE TO OTHER SCRIPTERS:
Do not post a modified copy or copy of the AutoRateSongs script anywhere. Modification should be posted in this thread only, and only the part that is modified.
Last edited by DiddeLeeDoo on Tue Jun 19, 2007 10:09 am, edited 143 times in total.

Situation, you do not have a single song rated and set everything to 4 stars just to get started.

Whenever you hear something that you do not like much, reduce the rating based on the tolerance for the song.

It is a script meant for when MM is in 'Radio Mode' using some Auto DJ script... would need easy accesss Enable/Disable so it do not rate when you sample an album. (If you sample an album, you can easely repair rating if you forgot to Disable the AutoRate Script)
Last edited by DiddeLeeDoo on Sat Apr 08, 2006 11:18 pm, edited 1 time in total.
Top

I requested a similar script awhile back, would love to see something get implemented.

I set my ratings to 2.5 by default (anything unrated I set at 2.5), then manually set them as they play when i have time.

I would love for it to auto reduce rating on skips.

Also update the 'last played time' while not incrementing play counts would be cool too.
New script:

Another little argument for this AutoRate stuff maybe;

You rate a song as 5 stars because you love it. As time goes by, you've heard it enough already, so an alternative to original "seconds played" could be;

If skipped, then reduce rating by 1/2 star.
Top

May be possible to tweak this script a bit to do ratings...

Edit - Added:
Installed, and I had to add a Number field "PlayPercentage" to in the table "Played" to make it work.
Top

I think my original idea was to increase the rating per play count, and decrease it by skip.

Originally I considered using a custom field to keep track of how many skips vs full plays etc.

Depending on the age and play count of your library, you could do something like:

Store that in a custom field, every play or skip would update the library rating as needed per increment.

To flesh out an example,

Say you skip the track once, that drops it down to .25, no change to current rating @ 3 stars.

Skip a 2nd time and it drops back down to zero and decreases the rating down to base 2.5 stars.

Skip 2 more times, it drops the custom field to -.5 which drops the rating down to 2 stars.

Anyway, I support the concept of 'auto-rating' as long its intelligently and flexibly implemented, and of course easy to turn off and on for those time when you don't want it changing things.
New script:

Teknojnky, I'm impressed with your BluePrint!

That would make it userfriendly for the masses, since it is quite gentle in its approach of rating songs. After all, rating is time based. Whatever was loved in 2001 may not be something you want to listen to today, so Rating is a living thing, and your BluePrint here allow for that in a very elegant way.

MediaMonkey is for those who have large collections, and doing manual rating is practially impossible, as it will forever be a 'should do' thing.
Top

just yesturday i was wondering also if there was a way to get the rateings adjusted by the number of times played.

play count after a week of playing would be set like below.

and anything greater then 101 would be 5 stars.

then have it rest all playcounts for the next week.

that way monkey would be more likely to play all the songs
as if you make it rate songs by play count and only play the
higer rated ones then you would mis some good songs that might
be a playcount of 2 that you like but monkey would not play.

so resetting the count to zero would fix that.

monkey already plays songs twice in a row sometimes. for some reason
and some times it does not play the songs you put in the lib. last year while
it plays the new ones. but it might play the older ones the next week,

it seems to go in a week cycle. but they all get played now.
only if i clear all the playcounts back
to zero it plays a mix of old added dates with new added dates until the
play count gets up on the songs then it starts going by the play counts more and more.

so making a auto rateing script would also have to make it randomize the added dates in a different way as to really mix up the songs more.

maybe by adding the ratings in to the list to choose which song will be played. so it would look at the added date , the play count, and the rateing for the songs to pick which one at random.

that i think would really give you a more random choice and stop the or slow down the double playing of songs.?

I'm just playing. Would this do the trick ? 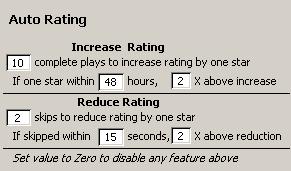 That would be cool, I personally would double plays and skips (or make it half star increments) so as not to change the rating too quickly.
New script:

yes that would be great and would work well with the weekly top of the charts list that cowboy is trying to get working only he can not program but it looks like he is close to having what he wanted with a code from steegy, but something like you just did would make sure of the weekly chart topper list he wants would work.

and i wouldn't mind this either.

I thought maybe a 'do not start auto rating before the song have been in the library for X days' would maybe prevent miss-ratings due to sampling of new albums, and I agree that half stars would do.

Plus maybe a roof and a floor for what the auto-rating is allowed to do.

Say you want the auto-rating only to be allowed to set a max of 4.5 stars, and then you know that any 5 star is your definite personal choices, and 4.5 stars have become 4.5 stars because you just play them a lot over a short period of time.
Top

And a song should also receive a bonus increase if you doubleclick on it (if you chose it by yourself).
Top

(May have to be OnError/OnExit)
If SongPlaying = StillPlaying at AutoRateSkippedPeriod then exit program
Else
Songs.Rating = Songs.Rating - 10
End If
Last edited by DiddeLeeDoo on Sun Apr 09, 2006 8:59 pm, edited 5 times in total.
Top

Big_Berny wrote:a song should also receive a bonus increase if you doubleclick

Wonder how the program would be able to register this double-click. Where do you think the double-click should be done. In the NowPlaying?
I was thinking if you're there already, you may as well right click the song, and use that easy-to-use rating you get when you right click a song.

This AutoRating stuff is really for when you do not focus on MediaMonkey. You just listen to music and do other stuff... However, you may hate a song that comes up, so you skip it because you're sick of it already...

Skipping songs is something you can do in many ways, by remote control/web control/FoxyTunes for Firefox and so on.
Top
Post Reply
644 posts