here is a attempt for a iTunes like skin ,no exact copy but inspired by.
coming Soon. 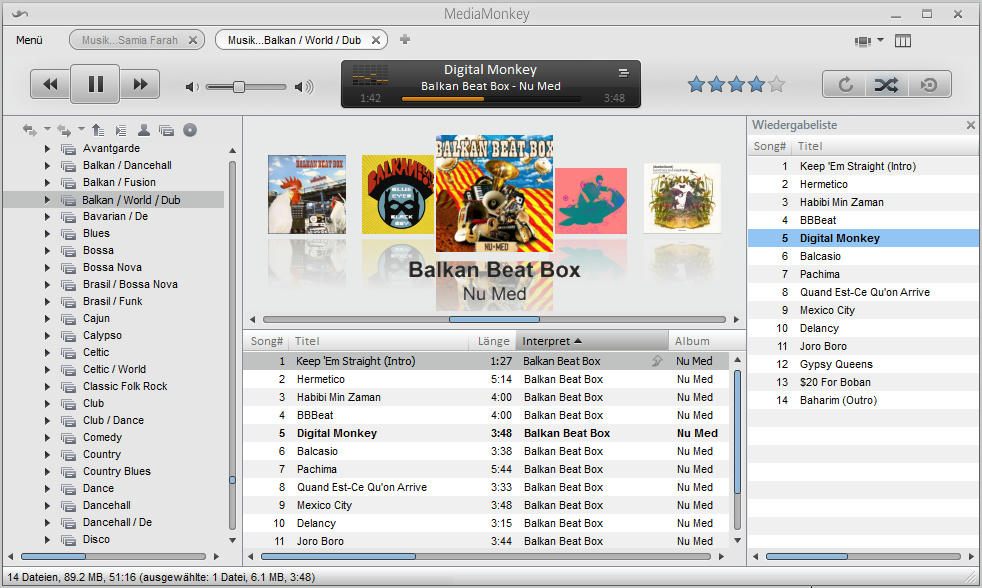 by gpzbc
I am looking forward to it!

by gege
DreadM, just out of curiosity, would it be technically possible to make the scrollbars (I mean, the blue and gray rounded areas) appear only on mouse hover?

by DreadM
@: gege
background from scroll bar is not possible ( gray one )
scroll bars are possible ,we have 3 states!
but make no sense ,because you don't know where they are, and it's difficult to hit them .

btw:
you can test now the iMonkey skin

have some nice days.

by gpzbc
Digging the MonkeyPlay skin. Thanks for your hard work!

EDIT: Are you going to release a MonkeyPlay skin? I would definitely be interested.

gpzbc wrote:EDIT: Are you going to release a MonkeyPlay skin? I would definitely be interested.

Sorry , but i stop the development for the play skin /player.
it was just a quick attempt to look if it works.
(if you are still interest, pm me, i can send you the unfinished theme)

btw: i decide to create a hole new Theme Player/Theme:
looks like this

I wish MM could do it on a more native way in the middle main panel,
still i hope for some improvements on this, maybe in MM 5 or MM 6

by gpzbc
I like what you are doing in your new idea - even more than the Play theme. I'll look forward to it someday, even if it is in MM 5 or 6.

by sixtiesstereo
Getting back to the original purpose of this thread, I thought I'd post some screenshots
of my current MM setup so others can possibly get some ideas for their own set-up.
I only use MM on my 60" home theater screen, so all screenshots are screen captures from the TV.
Also, I only use MM for browsing and playing my collection. My collection is artwork centric, so
therefore I only use MonkeyFlow, MonkeyRok and a full screen Album Art window.

Here's Monkey Flow full screen...... I scroll to the album I'm interested in hearing and stop: I then click MonkeyFlow out of full screen, which shows MonkeyRok on the right with the
MonkeyFlow image on the left (I've edited/reskinned MonkeyRok to how I want it): While the track is playing, I then open the full screen AlbumArt window, and scroll through the
multiple artwork images (pictures, covers, liner notes, etc): Occasionally I'll open the sizable VU meter I got off the web and open with the External Tools script: That's it for now. I'm interested in hearing what others think, and also seeing what
current setups others are currently using. (BTW, I use MM 3.2...tried 4.1 but decided to stick with 3.2).

by GeraldB
Magnificent! I can hardly stretch my mind to imagine MM on my big TV; gotta do some research.

GeraldB wrote:Magnificent! I can hardly stretch my mind to imagine MM on my big TV; gotta do some research.


I have my main laptop connected to my TV using HDMI and separate audio cables. Therefore, my TV picture is HD,
1920 x 1080 from my laptop. Looks beautiful.
Most laptops today have HDMI out, even the lower priced ones, so that would be something for you to check into.

by JCfantasy23
Sixties that's very impressive. I love images with mine as well and love your layout