I have a question. I have used this add-on many times but now it doesn't work anymore.
First, I simply did not see the add-on. I only saw it when I ran MM as admin.
So I uninstlled the add-on and installed it again (as admin) making sure it was installed for all users.
But still, when I run MM as normal user - I simply don't see the add-on.

As I said, this has worked in the past for many years. What am I doing wrong???
Thanks for your attention.
Top

Only with this add-on. I don't see it at all in the scripts menu as normal user. By the way: it is in the overview of extensions, and I can look for an update. When I run mm as admin, the add-on is in the menu, as it should. But all my music is grayed out.
I think I have the problem for quite some time, but first I thought it was my mistake. But now I really need the add on because my database is corrupt. And now I notice that I cannot get it to work anymore.
Top

I have a lot of addons. They are all installed by admin for all users.
What I mean is that when I run MM as admin, MM doesn't show my music in the normal way. All songs are listed in a grey color (normal is black). It means you cannot play the song.
This usually happens when the drive is not accessable. I don't know why this happens too when I run MM as admin.

I still don't understand why it doesn't work on my normal PC. If I have a bit of time I may dive into that. For the moment, I am over the moon!
Thanks for looking into this, and for your marvelous add-on!
Regards, Willy
Top

I have uninstalled MM completely (keeping of course DB and INI), and reinstalled it from scratch. All is fine now, and also your add-on works as expected.
Thanks for you advise!
Regards, Willy
Top 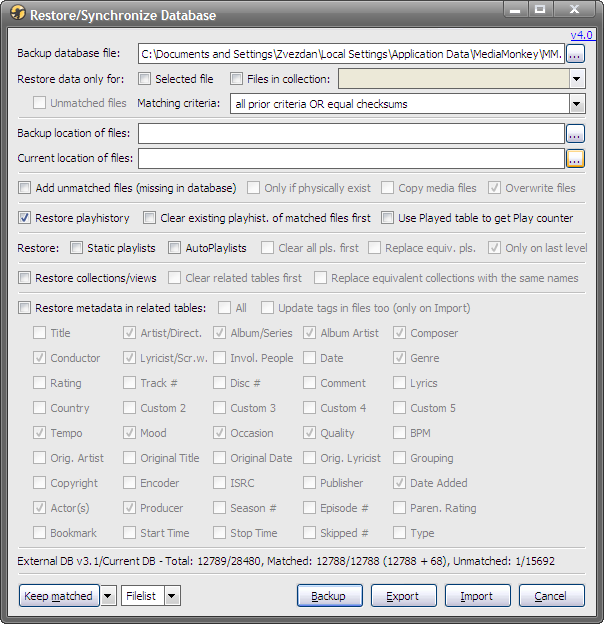 There is a new donation-only version v4.0:
* Added: option Add unmatched files which allows import/export of database records about files that are missing in the current/backup database;
* Added: option Only if physically exist that determines which records of unmatched files will be imported/exported;
* Added: option Copy media files which allows to physically copy unmatched files from/to the specified Backup/Current location;
* Added: option Overwrite files that determines if files with the same names will be overwritten in the target location when copying media files;
* Added: option Restore data only for - Unmatched files that is enabled if Add unmatched files option is turned on, so the data in matched files will not be restored;
* Added: Matched criteria combo box that allows choosing of criteria that was available in the previous versions only through the manual edit of MediaMonkey.ini file using the ExtraMatchTests key;
* Added: criterion only corresponding files at specified locations to match files between backup and current database;
* Added: Backup/Current location of files text boxes which could be used to specify source and destination base folders if they are different;
* Renamed: option Clear Played table & Playcount/LastTimePlayed fields first to Clear existing playhist. of matched files first;
* Added: option Use Played table to get Play counter which determines how the Play Counter field will be calculated when restoring play history;
* Renamed: option Clear Playlists & PlaylistSongs tables first to Clear all pls. first;
* Added: option Replace equiv. pls. that should be set if you want to replace playlists with the same names (within the same parent playlist) when restoring playlists;
* Added: option Only on last level that should be set if you want to replace playlists with the same names only if they are on the last (rightmost) level of playlists, i.e. they don't have child playlists;
* Renamed: option Clear Filters table first (also Views & NodeViews for MM4 db) to Clear related tables first;
* Added: option Replace equivalent collections with the same names that should be set if you want to replace collections with the same names;
* Added: combo box All which could be used to tick on/off all check boxes for metadata (Title, Artist, ...);
* Added: button with combo box which allow showing/selecting of matched/unmatched files in the main filelist;
* Changed: dialog box that is now resizable;
* Improved: speed of many SQL operations;
* Improved: restoring data of duplicate source files combining their playing history into the target files.
● Magic Nodes 4.3.3 / 5.2 ● RegExp Find & Replace 4.4.9 / 5.2 ● Invert Selection/Select None 1.5.1 ● Export/Create Playlists for Child Nodes 4.1.1 / 5.4.1 ● Expand Child Nodes/Expand All 1.1.2 ● Event Logger 2.7 ● Filtered Statistics Report 1.6 ● Track Redirection & Synchronization 3.4.2 ● Restore/Synchronize Database 3.1.8 / 4.0.1 ● Find Currently Playing Track 1.3.2 ● Queue List 1.2.1 ● Add to Library on Play 1.0.1 ● Tree Report for Child Nodes 1.1.1 ● Update Location of Files in Database 1.4.5 / 2.3 ● Inherit Child Playlists 1.0.3 ● Add Currently Playing/Selected Track(s) to Playlist 1.2
Top

The reason I'm trying to re-create my database is because I bought an SSD for my C: Drive and then had to reformat the drive with my music on it, in order to recover the space from the partition that was my C: Drive. And now if i hit the Add/Rescan tracks, it re-finds all my music, adds duplicates of every one, and then over the course of a few minutes somehow determines that they're duplicates and removes them all. But this never used to happen before I formatted, so I thought starting my database over would be a good idea. I even tried using a database from before I formatted (which had less music, but the add-on did match the 2079 files), and that database also didn't work with this add-on. So I'm not sure if the add-on is the problem, or my database.
Top

Theme based on Absolution by PlanetStyles