To discuss development of addons / skins / customization of MediaMonkey.

List (by Album) and Grid (by Album) views:
ONLY the albums from the collection should be shown here.
But "Unknown Albums" are also displayed and thus the entire collection again,
which of course leads to performance losses in large collections.
The "Unknown Album" are recognizable in the node "Files to edit"
It's just a suggestion. 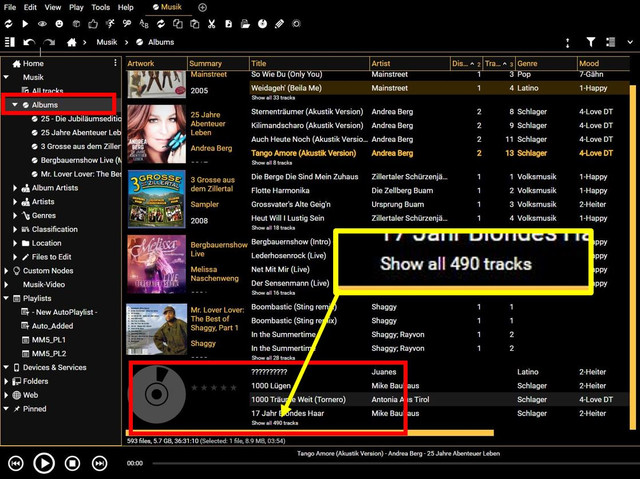 I'd expect this to be shown. If you want to Filter what's displayed you can use Filters or create Criteria in the Collection to filter out certain files.
Download MediaMonkey | License
Help: Knowledge Base | MediaMonkey for Windows 5 | MediaMonkey for Android

Lowlander wrote: ↑Mon Aug 08, 2022 11:50 am I'd expect this to be shown. If you want to Filter what's displayed you can use Filters or create Criteria in the Collection to filter out certain files.

Why would you expect non-albums to display in the Album sub-node?

Neither of these things happen. Those other sub-nodes manage to filter out irrelevant items.
Why are you expecting something different from the Album sub-node?

Erwin spoke of both the List By Album and the Grid Views.

The current behaviour seems (to me) to be (sort of) OK for the List By Album sub- node, because that makes that View consistent across all the sub-nodes ... eg. in the Composer node, it is OK that the List By Album View shows all tracks with a Composer tag, regardless of whether that have an Album tag.

But It "expect" the Grid View should also be consistent ... ie. should filter out items that do not have tags that are grouped together by the the sub-node.
Want a dark skin for MM5? This is the one that works best for me .. elegant, compact & clear.
Top

Thanks, Lowlander: Filter "Album is known" is the solution - BUT:
this applies to all views AND all Nodes
That means THIS IS NOT A SOLUTION.
Sorry, but your suggestion "create Criteria in the Collection to filter out certain files" is a bad joke.
MMW 4.1.31.1919 Gold-Standardinstallation auf WIN 10-64Bit Pro Vers. 21H2| Windows-Defender mit Echtzeitüberwachung. | Meine Einstellungen
MMA 1.4.5.0960 Free Beta-Tester auf Huawei Mate 20 Pro 128 GB Android 12 | USB-Kabel-Sync
MMW 5.0.4.2667 Beta (Free unregistered)-Standard installation in a separate collection for testing purposes only.
Many bugs that were still present in the "MM5 last official version" have already been fixed in Alpha- and Beta-Builds.
When an unexpected error occurred, I always wonder what errors were expected...

Google-Übersetzung:
I think you screwed up the assignment of views thoroughly - like in MM4, where you had to choose the views for certain nodes manually.

Theme based on Absolution by PlanetStyles