Song Editing The Way I Do it

UPDaTe to below., I now use the wav editor called Audacity. it is free and is best one to use now on windows Xp which i now have. the below one in the images worked fine in windows 95 and windows 98, but did not work in windows xp which is why i had to change.

copied from my website for music's "How To Fix" tip page. (except the images.) the images are a little fuzzy but i could not get them focused sharper. they show the difference in adding chorus for bass and for treble, and adjusting the volume. if you look at the two channel wavs you will see the spikes don't touch the other channels. this is as loud as you should make the volume if it is any louder and the spikes touch then you get clipping of the sound.
the wav's will appear like this with other wave editors the colors might be different.

this first image is how the wave looks before i edited it. 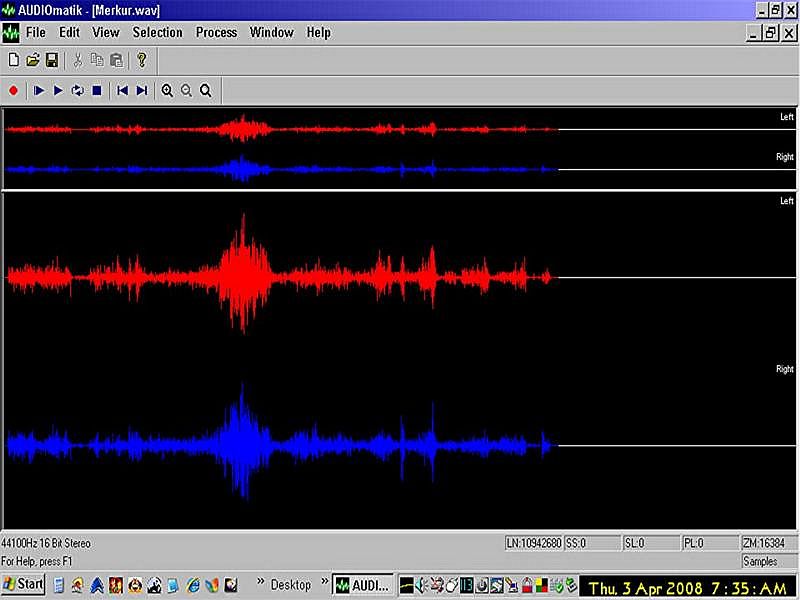 this second image is after i have edited it by doing the following rules. 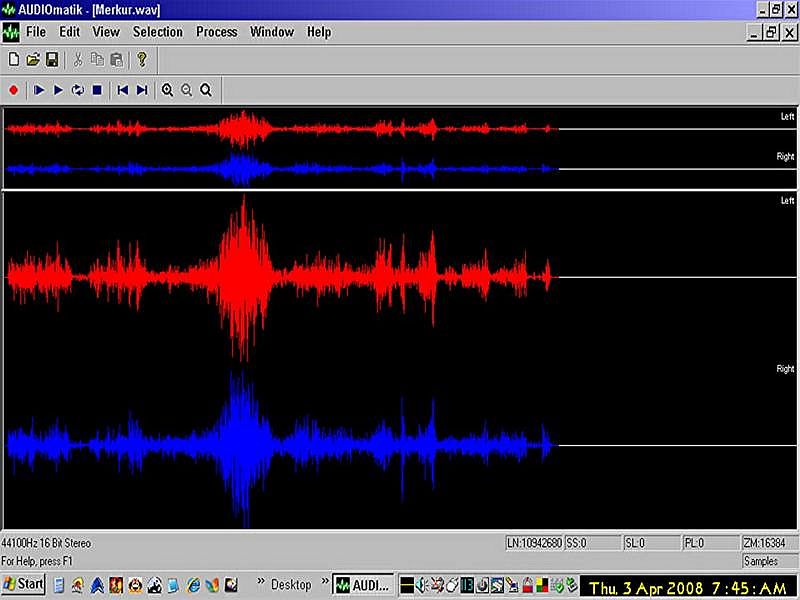 As of now the way I do this is for 16 bit sound as I don't have a better sound card or sound editor. So here is what i do for restoring my old record album's and adding them in to the computer.

I use my home stereo unit as in turn-table and cassette deck and equalizer. I then play the records and record them to cassette tape using Dolby "B" sound reduction. and the 14 band equalizer set up for normal sound trying to match the freq's in the middle and raise them on the ends that makes it look like a nice wave across the front of it. Which makes the bass louder on the left channel and the treble louder on the right channel. and not too much of a curve to the wave either.

Then once I have the songs on the cassette tape I use a fairly good boom box. What you younger kids call them now days I don't know but it is a portable cassette deck that has radio cdrom and lots of good sound effect knobs on them with loud speakers (Boom Box). I use the headphone jack in it to plug in a patch cord to connect it to the computer sound card, when doing this you need to remember that the sound card can be damaged by too loud of volume coming in to it through the line in jack so keep the volume on the boom box down to level 3 or 4 just to make sure it is low enough. You can adjust the sound volume with the computer later you just want to get the song in the computer without damaging the sound card.

OK you're ready for putting the song in to the computer good you will need some software called a Wav Editor. You can get free ones on line just look around for them or you can buy one that has more features on it.

I use both a free one and one I bought, there is also a wave editing studio that comes with the sound blaster live sound cards you can use that one too. You will also need large amounts of free space on your hard drive. And you will need to make your swap file, virtual memory, page file, or what ever it is called on your computer a large size and use a fast spinning hard drive.

You will see that the songs in the wav format are about 10 mb's of space for 1 minute of music so that is why you need the large free space and the large swap file, you also should have large amounts of ram.

OK now you're all set sound software songs on cassette tape patch cord plugged in you click the link to get the wav editor open and you click on its link to start a new file, you then click on the new file's record button and press the play button on the boom box, you sit there waiting to hear your song coming in to the computer, and sit there and sit there and sit there. Something has gone wrong you think it must have? And you might be right something did go wrong. Check the batteries in the boom box check the power cord in it to make sure it is plugged in to the wall, all is good there.

But still no sound getting in to the computer you stop all the recording and you start to play music on your computer yep-per you can hear it but no sound when you click record, only the start program sound from windows? so what is going on.

Simple you forgot to set up the sound recorder. Go to the control panel find the sound panel for your system, look for the place that says you can change the different system sounds when you click on buttons and resize the windows.

When you find that you want to find the place that says you can turn off those sounds because you don't want them on your song file so turn them off. Good now look on that panel for an advanced button or look on the different tabs for an advanced button you want to open the mixer control panel once you get the mixer up where you can see all the sliders for you to mute or make louder. Look for the word "options" then click on that word and find the word "properties" then click on it and when the next panel shows up click on the radio button, (radio button is what the little dot you select is called) beside the word "recording "when that changes to the recording one make sure you have the " line in " checked.

Then click the OK button on that panel. Now the recording mixer control panel is showing find the "line in slider" and select that one then turn the volume down to just under half volume. Then click the "X" in the upper right hand corner to close the panel.

Now you all set to record the sound from the tape and it should work now. So you rewind the tape to make sure your at the front of the tape. And start all over with the making a new file in the wav editor and clicking the record button for it, then press the play button on the tape deck.

Now you near the sound, when it is finished with the song, you need to click the stop button on the recoding program to stop recording it. Save it and then edit it which this is how I edit them.

I add in Chorus if the wav editor has that I first add in the higher sound with one echo here is the numbers I use :

That is the high ones up around the flutes and cymbals, the ones for the mid tone sound if needed I use :

Freq is 25 to 30 depending on the voice style of the male singers, that will bring out their voices better it also helps with the female singers but it is low tone for them, Modulation is 20% to 30%., Echo is 1, level of echo is 31% to 45% Placement of echo is 5 to 8 milliseconds.

You see most of it is the same as the high freq's. But for the bass I use this:

Some of it is the same as the high and mid tones but some is changed too. That is how I set up the chorus's now for the live style of echo i use this:

If your sound editor does not have chorus then you can just do the echo. By doing the above your changing the song file and giving it more sound, just a little bit but that can help when you compress it, as sometimes you lose words in the compression of the song file into, mp3 files or ogg files and that makes for a bad sounding song.

The reason I said the numbers in the higher or lower number value is because you need to listen to each song when you do this, as some songs don't need much and some need more.

After I am done with the chorus and the echos I then raise the volume level of the song to make the highest notes on the left and right channels almost touch each other. Then save the file as a wav and do the next one. I can get about 15 wav files on my hard drive at once before I run out of room and need to convert them to another format. ( I use the Ogg format that is just my likes as it is free and open source code there is no copyright on it to get you in trouble with. ) When I convert it to the ogg format I also have the program normalize it for me, and I have it set to make any thing under the 85% volume level be put to the 80% volume level, and anything over the 95% volume level be put at the 98% volume level.

Doing all the above will make the song sound more like the record when you listen to it on the computer. It takes a lot of work for each song to be done this way, but if your a person that likes to control how it sounds, this will be what you'll like to do.

Enjoy music it is truly the one common language. 8-)

since the above puts the echo in to the song file if you have a modern sound card with an built in equalizer or use a preset on the equalizer that comes with your jukebox software, you might just get too much echo.

The m3u playlist is just a text pad. it can hold different information in depending on what program is used to create the list. they each add in different codes to show the information of the song. but the only thing needed for the m3u list to work is this.


as you can see it only needs the location of the file and the file name. the rest is handled by the tags of the songs. If you are putting the m3u list on a data cdrom you don't put the drive letter leave that off. the drive letter is added automatically by windows when it reads, the cdrom drive you stick it in to play. and you of course will need to make the m3u list prior to burning the cdrom.
this m3u would look like this.


if you put the files on the cdrom and not use them in folders.

However if you put the files in folders on the cdrom that too is needed to be shown in the m3u list.


Hank Williams Jr.\Greatest Hits 3\There's a Tear in my Beer.mp3