This help document describes how to Wi-Fi Sync with MediaMonkey on your desktop. Alternatively you can use other methods to Sync like USB Sync or Sync directly to an SD Card.

To do a WiFi Sync from MediaMonkey for Android you'll need:

There are 2 parts to setting up Wi-Fi Sync:

To setup Sync the first time:

In MediaMonkey for Android the following settings for Sync are available: 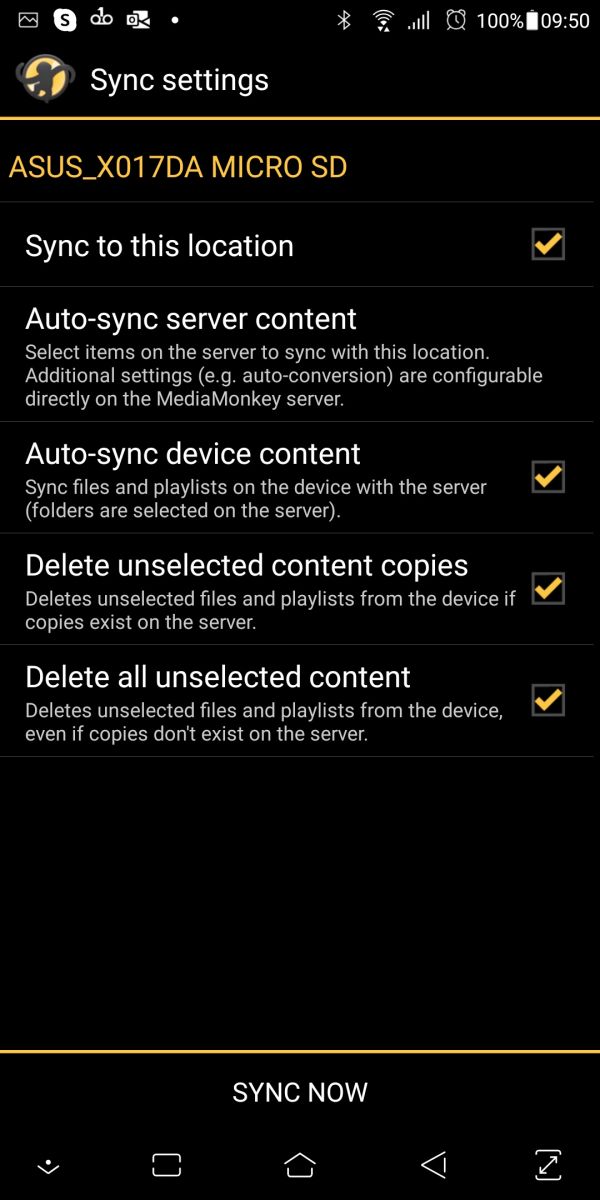 Sync to this location

This option allows to enable/disable that storage to be Synced to by MediaMonkey. You may only want to Sync to a single storage.

This option will delete any media files and Playlist from your Android device that are no longer selected to be Synced to your device, but are still present in the MediaMonkey for desktop Library.

This option will also delete any media files and Playlists from your Android device that are not selected to be Synced to your device, and no longer present in your MediaMonkey for desktop Library (like removed Podcast episodes).

To run a Wi-Fi Sync tap Sync now on the homescreen in MediaMonkey for Android. This will run a Sync via Wi-Fi using the settings you've setup for Sync.

When MediaMonkey for Windows (the MediaMonkey server) syncs with an Android device, it is capable of syncing tracks and playlists, including metadata such as Artist, Album, Title, and Track#, ratings, volume leveling information, play history, play count, bookmarks, Album Artist, Composer, Lyrics, and Album Art.  Whenever any of these attributes are updated on either the server or the device, MediaMonkey is able to sync the change so that your library appears the same no matter how it's being accessed.  For instance:

The richness of this functionality depends on whether MediaMonkey for Android is installed on the remote device, what sync mode has been chosen (auto-sync vs manual), how the server and device are connected (Wi-Fi or USB), and what options are enabled.

MediaMonkey for Windows 4.1+ can sync with any Android device, and is able to sync tracks and playlists along with basic metadata (Artist, Album, Title, Track#, Album Art) as it would to any MTP device, but Android players that rely on the default Android media scanner will be limited to viewing that basic metadata.


Some Android players may also able to read file tags directly, in which case they may also view ratings, volume leveling information, Album Artist, Composer, and Lyrics, Album Art, and fields that have multiple attributes from tracks that have been synced.  However, changes in the metadata may not necessarily sync back to MediaMonkey for Windows.


To view & sync all of the above content and metadata--along with play history, play count, and bookmarks, MediaMonkey for Android should be installed on the Android device.

There are two ways in which you can move music files to your mobile device: automatically (Auto-sync) and manually.

Auto-sync uses a pre-defined list of files of your choosing and syncs them with your device. These lists are configured either on the MediaMonkey server or in MediaMonkey for Android, where you can choose what content should be synced (e.g. Entire library, a randomized selection, songs of a certain band/genre/album, or only songs from a specific playlist such as "Driving music", "New purchases", "3+ star Music", "Workout" playlists, etc.). The point is that you define what should be synced once - and every time you Auto-sync, Mediamonkey will update content according to the defined criteria. An auto-sync can either be initiated automatically whenever you connect your device, or by clicking Auto-sync on the MediaMonkey server or in MediaMonkey for Android.

Manual syncing in contrast allows you to pick individual songs/albums/playlists etc and send them manually over to your device. To initiate a manual sync, right-click on the desired song/album/playlist and select "Send to", then select your device. Manual syncing requires a USB connection, although you can download tracks from a UPnP server over Wi-Fi to achieve similar results.

MediaMonkey for Windows (MMW) can sync with an Android device running MediaMonkey in several different ways:

To set up Wi-Fi syncing:

USB sync can be useful for first-time synchronization as it is much faster than Wi-Fi, or if you don't have MMA on your your Android device. However, it can be slow/problematic on certain devices.

See more about MTP and USB devices: Devices and Plugins

First-time 'sync' to an SD Card

The SD card should contain enough space for the library. You can not sync MediaMonkey with the existing files on an SD card: it will not make the match between the two locations/files. For syncing to work, files must first be synced from MMW by copying them to the SD Card.
If there are files on the SD card that aren't on the windows machine, and you wish to add them to the MMW library, copy them to the Windows machine first and add them to the MMW library *before* first sync.
Note: Because of the time required for first sync, first sync to the SD card should be managed with the SD card placed into the Windows device's card reader. Follow the instructions for this below. After syncing initially with the SD card directly on the windows device, return it to the Android device and sync via USB or WiFi for following syncs.
Also, if the files in the MMW library are stored on a cloud service, the sync will require downloading of each file for copying during the sync process. This will add significantly to the amount of time required for full sync.

Subsequently, you can sync via USB or Wi-Fi. Updating the library (vs. initial sync) is much faster so doesn't need to be done with the SD card in the windows machine card slot.

Finally, after you've attempted this numerous times over several weeks, you will realize that this process is a joke and doesn't work. Move on.

See the MediaMonkey Knowledge base.